It is excellent news that the "Hope for Haiti" Telethon yeilded over $57 Million  which will go toward aid efforts in Haiti.
As I watched parts of the Telethon on TV I was moved to tears and relieved the whole tragedy again.
I tried to explain the happenings to my 4 year old son who was also watching avidly and his rhetorical question was;"Mummy where was Jesus when the earthquake was destroying the churches" I paused for a while and said "He was there and he is still there to holding the hands of the survivors, they have a lot to be thankful for and are worshiping him in open air assemblies around the town".
I could tell this did not make sense to him but he let it go. 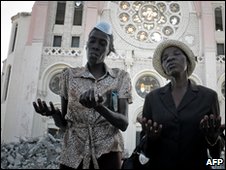 More Aid is expected from around the world even from Africa; Rwanda is planning a concert to raise funds for Haiti. All the churches in Nigeria have open a drive to collect funds for aid efforts in the small devastated Island.
Haiti born of a successful slave revolt by a population in which majority had been born in Africa is one of the poorest nations in the world despite it's status at the 2nd Independent Nation in the Western Hemisphere.
According to an Editorial in Lancet; "It is scandalous that it took a seismic shift in tetonic plates for Haiti to earn it's place in the international spotlight"
It is unfortunate indeed that much needed financial aid will come to Haiti on the back on a major natural disaster.
In the midst of the rubble, chaos, tragedy and immeasurable loss, they have been some miraculous survivours
Miracles in Haiti:
We should pray for the dead which today are over 150,000 as recorded in the capital city alone - Port -au- Prince. Not forgetting the displaced who are leaving in make shift tents and shelters all around the capital.
Special attention should be given to the orphans which have been largely misplaced; Some have been relocated to the US by adoptive parents but a whole lot of kids/children have become orphans due to this devastating natural tragedy.
We should also applaud the various aid agencies and bodies who are working tirelessly to salvage what is left of the nation Haiti.
The medical personnel should get a special Kudos; there are literally performing miracles - working non-stop without the right equipment and under hellish conditions to save lives.
Special thanks go to the;
To help reconstruct Haiti contact any of the agencies;